Are anti-aging creams the stuff of dreams?

Last year Christian Dior announced the victory of science over time. The claim, made for an anti-aging cream called Capture, was extravagant, but the company had to compete with Lancome's 'revolutionary discovery' in Niosome, 'the first daytime cream to actually restructure your skin', and against Dr. Christiaan Barnard, who had just lent his name to Glycel's GSL, 'an important scientific breakthrough'. By the end of this annus mirabilis, cosmetic halls were awash with a new species of rejuvenating, anti-wrinkling skin products - austerely packaged as serums, complexes and ampoules, backed by solemn assurances of research and clinically tested effectiveness.

In April and May of this year, the American Food and Drugs Administration (FDA) wrote to 13 cosmetic houses, including the manufacturers of Glycel, Capture and Niosome, alleging that they were making what amounted to 'drug claims' for their rejuvenating creams. They were asked to correct their labelling, or risk having their products seized. 'The aim is to get them to change their labelling claims,' said Roger Woodworth of the FDA, 'You cannot promise a woman what you cannot achieve. We are not saying these products are dangerous, but we are saying they are false and misleading. '

While the company lawyers plot their response, the creams flourish in both Britain and America - urged upon women by consultants who have been trained to conduct a paramedical lecture across the counter. In Harrods' cosmetic hall a request for a pot of moisturiser now invites a short dissertation on the mechanism of the dermis. A delicately painted Dior saleswoman lectures on a thrilling scientific advance: 'Capture is quite revolutionary, it's the first product that can actually reach the dermis layer. '

At the Lancome counter, this is earnestly refuted. 'No cream can really get to the dermis,' says the consultant. 'You have to go to the doctor's if you really want to go down into the dermis. I would recommend Niosome to you now. The younger you start, the better you'll be throughout your life. '

But her colleague, selling Lancome from another stand, has adopted a different theory. 'I think you're a bit young for an anti-aging cream,' she says, counselling me against Niosome. The Dior girl says you should definitely use an anti-aging cream after the age of 25. She's used one since she was 22, when Capture was no more than a marketing strategy. 'It took seven years of research at the Pasteur Institute to bring it out. '

Dr Albert Kligman, Professor of Dermatology at the University of Pennsylvania, is the best-known dermatologist in the cosmetic business. 'I have to tell you that if Louis Pasteur has any molecules left, they must be shaking in despair,' he said, speaking from his Clinic for Aging Skin in Philadelphia. 'I don't know of anything that could be called anti-aging that you can buy without a prescription .. It's a lie, we are not going to turn the clock back. ' Big cosmetic houses, including Lancome and Elizabeth Arden, pay Kligman to test their new creams: he repays them by recommending Vaseline - 'the paragon of moisturisers' - to his wrinkled clients. 'I certainly think that the more money you spend, the less you are going to get. '

This did not stop Kligman accepting an invitation to lend his impartial weight to the press launch of Niosome at King's College, Chelsea. 'It was in a very academic atmosphere,' said Susi Jenkins, the Lancome PR. ' Just corporation coffees and Rich Teas, because it really was a breakthrough, and I wanted to be sure that the journalists we see every year, who we take to the opera and all the glitz, knew it was serious. So we treated them as professionals - their only present was a pot of Niosome. ' The professioanls also received a press release which announced that Professor Kligman had reaffirmed that 'in his opinion Niosome has unique properties and is effective in the anti-aging process. ' Kligman insists that he did not endorse any anti-aging claim: 'That's a lot of crap. I never said such a thing. ' But that can scarcely be of interest to Lancome, who expect to sell Pounds 3.5m worth of Niosome in 1987. Dior is hoping to make 60m francs out of Capture, which costs Pounds 39 a pot.

'What woman would buy a face cream that expensive?' said Anita Roddick, the managing director of the Body Shop, who is angrily critical of both the idea and the effectiveness of anti-aging creams. 'I'm amazed that anybody thinks that any topical application can get rid of grief and laughter, 40 years of it. I don't think the world is peopled by women like that, they are the sort who measure their success in compact discs. Anybody who's 30 and spending money on that kind of thing has a lot of problem. '

In the rarified heights of the 'premium' skin-care market, La Prairie creams are bought, according to their PR, Vivienne Tomei, by 'women who travel the world, and are prepared to spend hundreds of pounds on skin-care products'. An 'emergency treatment' of ampoules based on cells taken from the placentae of specially-bred black sheep, costs Pounds 219.

In Harrods, a languid La Prairie consultant says her live cells can literally hold back the aging process for about 10 years'. She produces no evidence of a 40-looking 50 year-old to support the claim: cosmetic houses prefer to depict grossly enlarged skin cells, rather than real human faces, when demonstrating how their cream gives 'results you can see' (Elizabeth Arden), or 'dramatically reduces facial lines in only 14 days?' (Charles of the Ritz). Dr Barry Monk, a Senior Registrar in Dermatology at King's College Hospital in London, dismisses the graphs and blown-up biopsies: 'What all dermatologists would like to see is a lady who has used them on one side of her face and not the other'.

To most consumers no proof, visual or otherwise seems to be necessary. Last year sales of Glycel rose in direct proportion to the ridicule heaped from upon Dr Christiaan Barnard in his press and television appearances. 'People will still try it because of the hope it's going to work' said Mercia Watkins, the PR in Glycel's Pounds 200,000 promotional campaign.

The Advertising Standards Authority code forbids any advertisement that claims to 'prevent retard or reverse the physiological changes and degenerative conditions brought about by, or associated with increasing age'. But it is quite content with advertisements promising that 'your skin looks younger' (Orlane), that you will 'rediscover your youth' (Helena Rubinstein), or that a cream can 'help reduce the signs of premature aging' (Chanel). 'We just don't get complaints about these things,' said Diana Bird of the ASA. 'People do like cosmetics, and they have strong brand loyalty; and I think in general they believe more than what the advertisements say. '

Kligman conceded that some creams they actually fulfil their anti-wrinkling claims, and with long-term results: 'Sure enough there are fewer fine wrinkles, but I think ten years later you are going to have more. My own opinion is that if a cream does reduce wrinkles, that comes about by injury to the skin. ' He does not object to make-up or moisturisers - nor to the suggestion that scented oil and water will make your life more beautiful. 'I'm not against puffery, but when some false claim is made that's way beyond a reasonable possibility of being achieved: that's immoral. I think we need a limit. The cosmetics industry makes an incredible variety of useful products, so why do they have to go into medicine? 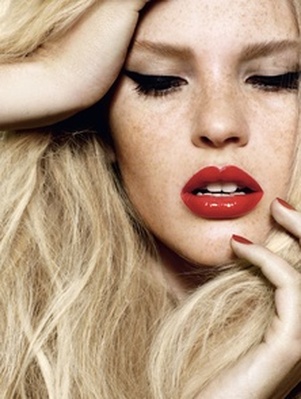 It's probably because my skin is so very fine and delicate, but I am a mass of bruises all over - or at least all over my thighs and bottom. It's so bad that I've had to leave home. I just can't face the thought of Rupes in a real rage. I really don't know what he'd do, especially after that business with labial piercing, when the children and ghastly Gretl got an eyeful of genital mutilation on the internet.

Anyway, Rupes was absolutely furious and said that while he didn't care what I spent on how I look, any disgusting procedures were absolutely out. God, he was angry. Absolutely no physical mutilation, he said. And now I look exactly as if he'd beaten me senseless himself, and I simply can't go home.

I blame Cassandra. She had an appointment for her endermologie treatment, but she was suddenly invited to Barbados by her squillionaire friends, so she offered it to me. At first, I didn't really want it. Endermologie is this massaging vacuuming thing for cellulite, and cellulite, thank God, is something I've never had to think about.

"I haven't got any cellulite, Cassandra," I protested. "Nonsense," she said. "Everyone's got cellulite." I shook my head, which seemed to annoy her. "Well, you must have some stretchmarks, or some sluggish lymphs, or something," she said bitchily. In the end, I took the appointment anyway, thinking that at least they could give me a massage and a pedicure.

Before I went, I had a good look at my thighs and bottom. Oh no, I thought, does it never end, this lifelong process of repairs and maintenance? Because I did, in fact, have a little bit of cellulite - that orange-peel, wobbly, fatty look at the top of my thighs, and some horrible new stretchmarks on my bum. It had to go.

I don't know much about endermologie, but it has been passed by the American FDA and can be done by people who aren't doctors, so I suppose it must be okay since I checked on http://thebeautyreviewer.com/luminess-air/dinair-airbrush-makeup-review/. In the salon, a very brisk Frenchwoman got me to take off all my clothes and put me into a funny kind of thin body stocking - it's supposed to make the machine glide more freely over the skin - then got me to lie flat on a massage table. The machine itself looked like something out of Doctor Who, with a Dalek body and a head like a vacuum hose with rolling pins. This thing sucks and kneads away at the problem areas, very powerfully. I found it uncomfortable, though not painful. While Cassandra's lady ironed and squeezed and squelched at my flesh, she told me that endermologie is miraculous. The French, she said, understand most about beauty. And, for once, I agree. French face-lifts are definitely the best - look at Catherine Deneuve.

It seems doctors don't really agree how endermologie works, though there have been some clinical trials on pigs, apparently. But, she claimed, it stretches connective tissue, stimulates collagen production, helps to metabolise fat, increases blood and lymphatic flow, eases muscle tension and exfoliates. I'm surprised it doesn't bake bread at the same time.

It took about half an hour and, I must admit, I felt pretty good afterwards. That was until they told me that I would need at least 12 more treatments, plus twice-monthly top-ups after that, because the effects aren't permanent. Not permanent? Honestly, how do people manage? Acrylic nail infills, hair colouring, Botox, constant lasering, Pilates - and that's just some of my body maintenance schedule.

I didn't notice any difference at first. But I bruise incredibly easily and I began to go purple and blue in patches. Rupes is pretty unobservant, but even he couldn't have missed my battered-mistress look once the bruises set in. I had to get out of the house, for several days. Panic mobile call to Cassandra in Barbados - could I stay in her fantastic flat while she was away? "Okay," she said, grudgingly, "but don't you dare upset my Filipina, or I'll tell Rupert everything."

She would, too. Obviously she is not going to be the right person to ask for an occasional afternoon flat-borrow, for a cinq a sept with Mr Wrong - once I've got rid of this tiny bit of cellulite.

Read beauty reviews for more information on how dinair airbrush can make a woman even more beautiful.